Watercolours for sale
Wishing you all a festive season 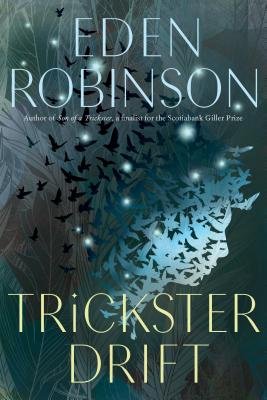 I had to think for awhile about Eden Robinson’s first two novels in her Trickster trilogy, Son of a Trickster, which was shortlisted for the Giller in 2018, and Trickster Drift.

The novels tell the story of Jared, a burned-out kid of mid-adolescence, living on the west coast of Canada in an Haisla Nation family. To say his family dynamics are abusive and dysfunctional would be understatement. With no moral compass but his own sense of compassion, and desire for something better, brighter, he gets by in high school by squeezing cramming sessions of study in between baking and selling pot cookies in order to pay the bills. And when it all becomes too much, he sinks into binge-drinking.

The novels can easily slide into magic realism, even dark urban fantasy. They are relentless in pace and emotional tension, with tight, spare writing that mirrors the desperation of Jared’s life. Certainly, the novels are award-worthy. Not easy to read because of the brutality and hopelessness of the narrative. But most definitely brilliantly written. You could say they are a modern, dark take on J.D. Salinger’s now legendary Catcher in the Rye.

What has given me pause, however—and please understand this in no way is a reflection of the author’s skill—is the classification of these novels. That is to say, they are marketed as YA.

When my daughter-in-law informed me of that, I was, to put it mildly, gobsmacked. What follows in this review-come-commentary, contains many spoilers, so be advised.

Perhaps my problem with the novels is a sign of my own ageing, of carrying with me what is perhaps an outdated compass more suited to senior citizens than current societal standards. But having read these novels I have to wonder about what kind of standards and messages we’re cementing in society, let alone for our youth, particularly First Nations youth, with the promulgation of literature so egregiously violent and lacking in hope.

As a first example I give you Maggie, Jared’s mother. She is a bad-ass junkie of a mother, with a reputation of a witch in the Haisla tradition, whose expertise, besides being able to cast curses and wardings, is to ally herself to a drug-dealing man who has about as much interest in carving out a safe, secure environment for Jared let alone Maggie, as finding a legitimate way to make his way in the world. Maggie swings between fierce love, casual neglect, and outright violence toward her son. The worldview she imparts to Jared is that in order to get by you have to be tougher, stronger, more violent than anyone who opposes you, no boundaries, anything goes. She helps him to deal. She obtains for him a handgun and teaches him how to use it.

As illustration of her complete lack of parenting skills, when she discovers a previous boyfriend, David, was in the act of sadistic, violent torture of her son (kneeling on Jared’s chest so that he could slowly, casually, break the boy’s ribs), her response is to nail David’s feet to the floor with a power-nailer. (I won’t get into the implausibility of sneaking up on someone with a power-nailer.) When she drags Jared out from under David, she then, in a rage and without regard for Jared’s serious injury, commands Jared to nail David’s armpits to the floor. Only after Jared refuses is an EMS team summoned and the boy’s injuries addressed. He then spends his recovery couch-surfing with an elderly neighbour.

The level of egregious violence and written detail regarding this encounter put me in mind of Stieg Larsson’s Millennium Trilogy.

And this is only one example of the relentless onslaught of graphic violence in both novels.

Now, understand, I have no difficulty whatever with this level of violence and darkness in novels for adults. Certainly, I’ve published fiction for adults by authors who write this sort of dark literature. However, I do have a great deal of difficulty with novels of such an explicit and hopeless nature for young adults. I have to ask myself, perhaps in a typically senior fashion, what kind of message does this send to our youth? It’s hard enough finding your way as a young person, particularly today, without creating a normalized view of this sort of violence. And then what about First Nations youth who are, of course, going to want to read work by a First Nations author, particularly literature targeted for exactly their demographic?

That suicide rates, alcohol and substance abuse are rife among our First Nations youth is a national crisis. And then we’re going to introduce this kind of literature to them, let them know it’s okay to read because it’s been cleared by the publishing gatekeepers for them? And then we’re going to expect them to be able to find some sense of hope? That there’s a way out? That there’s maybe something more hopeful in their society and their lives than violence, drug abuse and the endless repetition of that? That they’re told they need to educate themselves, but then read about a young person who is desperately trying to do just that, and who is constantly dragged down not only by drugs and violence, but by the magic of his own culture? That there’s no way out but through violence?

That’s the message in these two books. It’s very clear. As an adult, I can discern, navigate, discuss. But as a young person? Sure, I’m not saying young people aren’t capable of rational thought. But I am saying if you continue to disseminate a message of violence and hopelessness, that’s what you get.

So, at the heart of this categorization of the Trickster Trilogy as YA, I cannot help but feel this is no more than a marketing ploy by the publishers to capitalize on a soaring trend in literature. Ride the YA train to financial gain. The hell with any kind of societal responsibility, particularly to First Nations youth.

Would I recommend the Trickster Trilogy? Most definitely. To adults. But I will never recommend these novels as reading for YA.